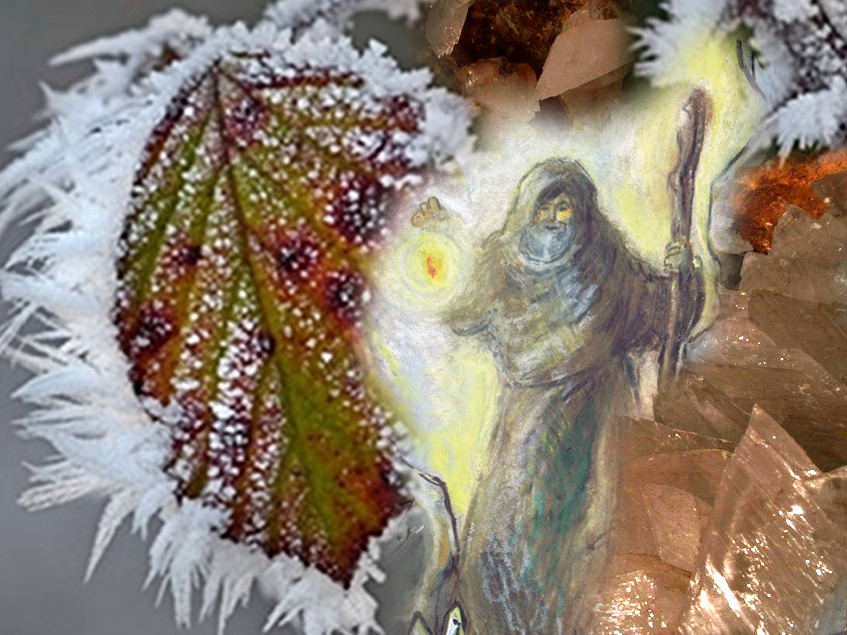 Body symbolism of the coccyx – back to basics

Alchemy and the entry into Winter

In Celtic traditions, the New Year now begins after this Samain. I have asked myself and others, why?…when clearly the days do not begin to grow again until December 25th, initiating a new solar cycle?

The best answer lies in the alchemical cycles on which our body symbolism is based. The cycle starts well with the child archetype (womb) at Christmas, and from there all the energy unfolds in the world and in us through our three stages: instinctive, emotional and mental… to the master-poet archetype (chin) that we explored in early November.

The master embodies the complete harvest of the cycles we have gone through, which a poetic and inspired word will redeposit on Earth.

Now, in mid-November, we start again from the Earth. In a way, an invisible cycle is starting again, which aims to forge the seeds in the depths, to transform what is old until something new can unfold after Christmas.

And as we start again from the Earth, it is really the beginning of winter.

Other needs emerge with this radical phase… hence the traditional celebrations of this period!

The return to the essential and the archetype of the Hermit

In this descent to Earth at the end of the cycle and in the background of the child to be reborn is the family of the Sage in connection with the back of the pool. The first of these, the deepest, is the Hermit. This is the coccyx.

What could be more like a diamond than the coccyx?

This tiny bone is a precise, sculpted point… and like the diamonds in the hollow of the earth, it is hidden at the very bottom of our body, at the root of the perineum.

It is the light in the darkness.

It can also be compared to the tip of a pendulum that indicates, sensitively, the right direction at all times. A direction that points to the centre of the Earth as the centre of our most important values.

The essential, the wonder, the starting point

The Hermit, in our deck (Les Cartes du Corps) as in the Tarot de Marseille, is card number 1!

We start from what is essential: this anchoring to the Earth… this simple evidence that I am a terrestrial being attached to this planet by the force of gravitation, that my entire matter comes from it, that I am a living emergence from this world below.

Starting from that, it is to find common sense again, it is to get out of the spiral of information of the past year, it is to return to the simple.

… and it is also to return to wonder: the coccyx is a diamond whose function is to connect us to the perfection of all minerality. The Hermit is a simple wisdom that makes us look at these stars deposited in the matter that are the crystals.

Like an old man who has purified himself through meditation, he has the freshness of a child, his tingling curiosity and his purity. In this, too, he is the source of our true grounding.

The coccyx is almost invisible and it is indeed at the base of our being which is the perineum. From it, the sacrum unfolds, then the lumbar vertebrae and the rest of the axis. As thin as it is, it is a kind of root.

As the name Hermit reminds us, it carries with it a quality of healthy withdrawal into oneself to find one’s own wisdom and no longer be a leaf in the wind of crossed information. It is a vital quality that we often have to relearn to honour.

The most common and so widespread is that brutal fall on the buttocks that sits us down, which can impact the coccyx, crack it, break it.

In a shock like this, we are literally brought back to earth!

The fixity of the coccyx leads to numerous stoppages in the body with disabling consequences that are sometimes prolonged in time. Osteopaths know this well. The positive point is that the mind calms down.

We can suppose that when we fall on the coccyx, the body sends us a strong message and alerts us to the need to return to simplicity and common sense!

« What really matters to you?

« Are you coming back into yourself enough?

… and this, whatever the season!