Fear of the Living 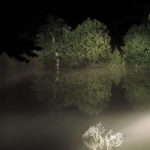 The will to control.

Where does the will to control populations come from, to impose screening, vaccinations, tracing, to modify the DNA of living beings to make them more efficient, to interfere in other countries under the pretext of wanting to make peace there, to sprinkle the atmosphere with particles to try to control the climate, to plant the trees in lines believing to increase the productivity of the forests, to send religious, cultural and health missionaries to the underdeveloped peoples to save them, to filter what is right to say, to destroy local identities, to think of improving the human being with technology, to make him immortal. …? … and above all, what is it that can push populations not only to accept all these levels of control, but to adhere to them, and even more so to call them?

It is all too easy to invoke the malfeasance of a group of cynical individuals and the ignorance or submission of peoples as the only explanations. That certainly exists, but there is a deeper, more fundamental root.

Fear of the living.

This fear does not only concern states or the forces of power. This fear of the living is riveted in most of us in a very deep way.

What an incredible curiosity about life! The human being is a member of the great tribe of living beings, an incredibly complex organism, resulting from the billions of years of existence of this planet, whose every cell is a treasure of engineering, whose body is a marvel of organization, of constant adaptability, which exists and grows in the flow of matter that constantly passes through it because it coexists with a host of microorganisms, that these microorganisms exist even within our cells, that we permanently house bacteria and viruses, themselves carriers of precious information, of unique DNA, capable of essential protein synthesis. .. our whole body which is a community of linked intelligences, where the limit of what is “us” and “the other” is not a clear line, where nothing is an impassable frontier… the human being, therefore, mountain of life in an ocean of life… has developed the incredible fear of the living!!!

If we don’t embrace the immensity of this collective madness, if we don’t consider the unfathomable depth of the suffering that lies behind it, then we are doomed!

If we don’t start from there, then we will continue to wander on the surface of the problem, naively wondering why nothing changes.

I belong to that generation whose parents (and even their parents before them) believed in 68 in the possibility of a better world, who had put their commitment, their intelligence, their sincerity and also their immaturity in that direction .

I am carried by these impulses of world transformation.

I am an anarchist in the primary sense of the term, one of those who believe in the possibility of an “order without power”. I have been active for a long time in libertarian groups…

… but I am also one of those who encountered one day, very early in my case, the wall of the limits of their personal functioning, dictatorial systems of protection in the background of their so-called magnificent values and social conscience. I have left any militant movement to tackle a more impalpable and complex task: that of understanding and softening my inner mess a little.

I have been working on myself for 25 years, since I was 20, when I fell from my pedestal as a brilliant student-researcher certain of the supremacy of his brain.

I should say that self exploration is my job… but to claim expertise in such a vast field would be arrogance! Nevertheless, I’ve learned two things I’m sure of during these years:

The intelligence within us, in our bodies, in our living being, is immense, inexhaustible, marvellous and forces us to bow down as soon as we pick up a scrap of it.

The more we get to know each other, the more we realize the depth of the suffering that inhabits us… and the more we plunge into it, the more we actually encounter life and wonder… but for all that there is no final key, no total liberation… we simply learn to embrace it.

The experience of these two things makes me speak as a person who knows no other way than to listen to the living again and again, whatever situations we encounter and the questions we ask ourselves… which amounts to listening again to our body, the closest wilderness space to us, the one through which we perceive, feel and think.

I militate with all my being so that we re-appropriate the wild. The living is wild. The savage is scary. In the past we used to burn witches, today we disinfect with bleach, we vaccinate ourselves, we pluck our hair, we are afraid of the diseases that are in the humus, we are lost in the woods… ! We all participate by our actions in this dynamic of control of the living…

We all participate in it in a much deeper way.

It has been 25 years that I have been on a journey to listen to this living being, to go with it, to ride this powerful beast… well… I am obliged to admit that I only make occasional incursions into it, and that certainly I only know its perfume. … that even if I know the benefits, the reality is that I am forced to see all the strategies at work in me to continue not to listen, not to let myself be taken in by it, to find solutions with my mind, ways out!

But I believe that homo modernicus is not crazy!

If he puts so much energy into controlling life, which is so much bigger than he is, it’s because there’s a good reason… it’s because there are in our unconscious, in our flesh, personal and collective sufferings that are so intense that it’s understandable to want to run away from them.

If we miss this reality, we’re screwed! Completely fucked!

Because a nuclear bomb is inside us, inside all of us. We can’t defuse it with technology, it’s far too strong! Absurd naivety of man, of Promethean transhumanism larvae in the collective unconscious: in each one of us life has been violated many times in the history of humanity. In each one of us the innocence of the scorned life screams with rage, roars with indignation. A monster of anger storms beneath the surface and can sweep everything away at any moment. Tsunamis and rising waters are within us!

One day I stopped being active in political groups. During a meeting I saw that none of the people gathered around the table, myself included, were living up to their ideals. Time has passed and I think so more and more.

Yes, however, I think it is normal to be vigilant and not let those who could harm the community in the short term, to stand in the way of those who have enough power and hypnosis in them to believe in the possibility of regulating humanity and the planet through some form of technology.

But the real demon is somewhere else, it’s in us.

But this demon is not a demon: he is only a living wounded one, so wounded that he could destroy everything… like a child raped, mistreated, not listened to, in an endless anger.

Today we realize how fragile the ecological balance is. I think we don’t yet realize how fragile is the balance within us. Burn-outs are on the rise… and that may be a good sign. Life no longer allows itself to be mishandled. It withdraws, like an engine that shuts down in safety mode.

As we become aware of the violence that is built up inside us, we begin to realize how much all of us, with our injured bodies, are potentially dangerous to each other… even if we advocate for a better way or adhere to a non-violent philosophy… We realize how much mankind is walking on eggshells… a sensitive walk that has been going on for at least centuries and seems to be reaching a kind of climax!

One day, perhaps now, we will have to stop, sit next to the lion that we have locked in the cage, find a way to get him out of there, this furious animal, without him breaking everything in the process. You may have to dance for a long time next to the enclosure to relearn how to trust the savage again and let the bars dissolve…

From my experience as a person who can do nothing but small danced or poetic steps towards this living content, I invite all those who read these lines to become aware that all the problems of our societies are in no way external to us, and that if we do not individually take our small internal steps to gradually let go of this antediluvian monster, then all our actions as firefighters to denounce such and such an influential personality, to thwart such and such an infamous commercial strategy of financial trusts or to counter such and such a liberticidal law, will be nothing but powerless actions, endless reactions, repeated participation in a scenario based on fleeing from the suffering that has lasted for so long.

There is nothing esoteric about what I am sharing here.

We are an integral part of the system of the living.

Our genius brain is not the cutting edge of evolution, it’s part of that system.

We are navigators whose rafts are derisory compared to the ocean that carries them. Our power of action, of real action, is reduced. When we bring consciousness back into it, we realize that the raft is part of the ocean and we can begin to regain a form of friendship with the deep currents, and an interest in going with what they offer us… then “we” (i.e. us and the ocean) become powerful… and peaceful.

We can’t do that as long as we deny the traumatic reality of our unconscious… and getting out of this denial, we have to repeat it to ourselves, it takes time.

Many see this health crisis as the possibility of a “new world”… I wish it myself… but I’m sure it will take time. You don’t get out of the trauma overnight, these are small steps… and yet I think they are the most interesting steps we can take.

All of this is so precious, so fragile, so delicate… we all need time to slow down the emergency, to regain the measure of this mountain in us that we have abandoned, to relearn how to listen.

Co-author of ” Cartes du Corps ” and co-founder of ” Neuf Souffles “, with his wife, Anne Ena BERNARD like him dedicated to finding the link to the intelligence of life in us.

Any cookies that may not be particularly necessary for the website to function and is used specifically to collect user personal data via analytics, ads, other embedded contents are termed as non-necessary cookies. It is mandatory to procure user consent prior to running these cookies on your website.